More of These Attacks, Please! 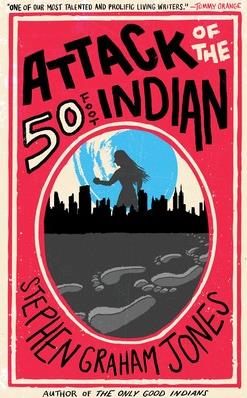 Attention readers: The world of speculative fiction is under attack... the attack of author Stephen Graham Jones and he is way taller than 50 foot, he's gigantic!
"The Attack of the 50 foot Indian" was a wonderful surprise in this horrible year 2020, since I was only expecting The Only Good Indians to be released by Jones. I haven't read the latter yet by the way, but only due to the sheer overwhelming mass of seriously good horror literature being published right now. BUT I very soon will catch up since the 50 Foot Indian has left me wanting to read more Jones and made me rearrange my TBR-pile.
This little book follows the Hollywood tradition of very large people or things attacking the world, but is highlighted by Jones' very own, very necessary sociopolitical twist.
An Indian giant is discovered sleeping between the Bering Sea and Siberia. They name him "Two Moon" because two moons have been sighted the night he was found; one yellow, one brown. As confusion takes hold among the world population, so does aggression against Two Moon, leading him to do "what any giant would do: he turned around, ran away". But aggression is not all Two Moon encounters - he also experiences support from people all around the world who paint their faces yellow and black in solidarity. Especially for the reader it is hard not to root for Two Moon. I found myself on the edge of my seat for the short time it takes to read this story, hoping he will make it alive.
Dispersed among the partly comedic and partly adventurous moments, there are some astoundingly unsubtle but deeply moving passages that you will want to return to and read again and again. Take these for example:
"He was moving mostly at night, and drinking from rivers and streams, the giardia protozoa too small to be of consequence to his massive immune system, and evidently what he was subsisting on was rage and recrimination.
When interviewed on whether that was a sustainable traditional diet, a Shoshone elder looked into the camera and shrugged, said it had kept him going for eighty-eight years so far, hadn’t it?"
or
"'I quit,' the aide said, and walked away, his fingers dragging yellow paint across half his face, the other half of his face already black."
"The Attack of the 50 foot Indian" is a wonderful little parable which, in my humble opinion, should be read and taught in every school. One last warning, though - what starts in giggles and laughter at the absurdity and wryness, may move you so deeply to end in tears. It did for me.
I have been reading and waiting for new releases by Stephen Graham Jones for about two years now and my enjoyment increases gradually. Not being American myself, I sometimes have the feeling of missing something in his books that plays a key role in his understanding of horror and that I should know more about to fully understand. Take, for instance, the importance of the traditional dancing garments in Mapping the Interior, which I didn't know anything about but had the feeling contributed massively to the eeriness of the atmosphere.
But these are the things, the moments we read for, right? These are the things that invite me to look them up, learn more, broaden my horizons. An aspect that generally falls seriously short in escapist horror literature.
I immensely enjoy Jones' slow pace, his voice and would not want to miss any of them in the realm of speculative fiction. So I will surely read more and review more of his books and stories. (If you want just a taste of his writing I very much recommend “The Tree of Self-Knowledge”, a short story that was published in Ellen Datlow's Echoes: A Saga Anthology of Ghost Stories.)
So Stephen Graham Jones: Attack us with more stories and novellas and books! The world wants and needs it!

Popular posts from this blog

June 29, 2020
Hello, good day and welcome to my new blog! İnci here, many of you readers will know that I have been working on and off at the Otherland Bookshop in Berlin for the last five years. Well I have news: my bookselling days are over now, I have closed that chapter. Even though I will always be an Otherlander at heart, as of the end of March'20 I am not working there anymore.Which means that I won't be writing for the Otherlander's blog anymore - but it is still totally worth visiting the blog of Berlin's only SFF/H bookstore and the store itself too if you live or happen to be in Berlin! Which also means that I am now starting my own blog "protean depravity" since I don't intend to stop my reading of freaky books and watching freaky movies and sharing my opinions on them with anyone who is interested.
Post a Comment
Read more

August 24, 2020
In her relentless account on the colonization of the American continent entitled La Férocité Blanche, the wonderful author and activist Rosa Amalia Plumelle-Uribe states something along the lines of "For the ones who know what it is, colonialism is not a word that needs to be explained. It consists of horrific and dreadful deeds" - in other words; horror is an inherent part of colonialism; horror is in colonialism. In the recently published The Only Good Indians the also wonderful Blackfeet author Stephen Graham Jones ingeniously reverses this statement by putting colonialism inside horror and brings horror back to where it has always belonged.During the whole time I was reading The Only Good Indians, not once did I guess where the plot would lead, nor did I foresee the emotional magnitude of that glorious conclusion. The story of Rick, Lewis, Gabe and Cassidy, four indigenous men who are being haunted by the elk they have hunted a decade ago, at first sounded like a sort…
Post a Comment
Read more

"I distrusted him from the start! Still, who could imagine such protean depravity?"
Jack Vance

Upcoming (or Slightly Older) Horror Movies To Be Excited About